We use cookies to personalise and enhance your experience.

We boosted our sales pipeline by 80% with automated proposals 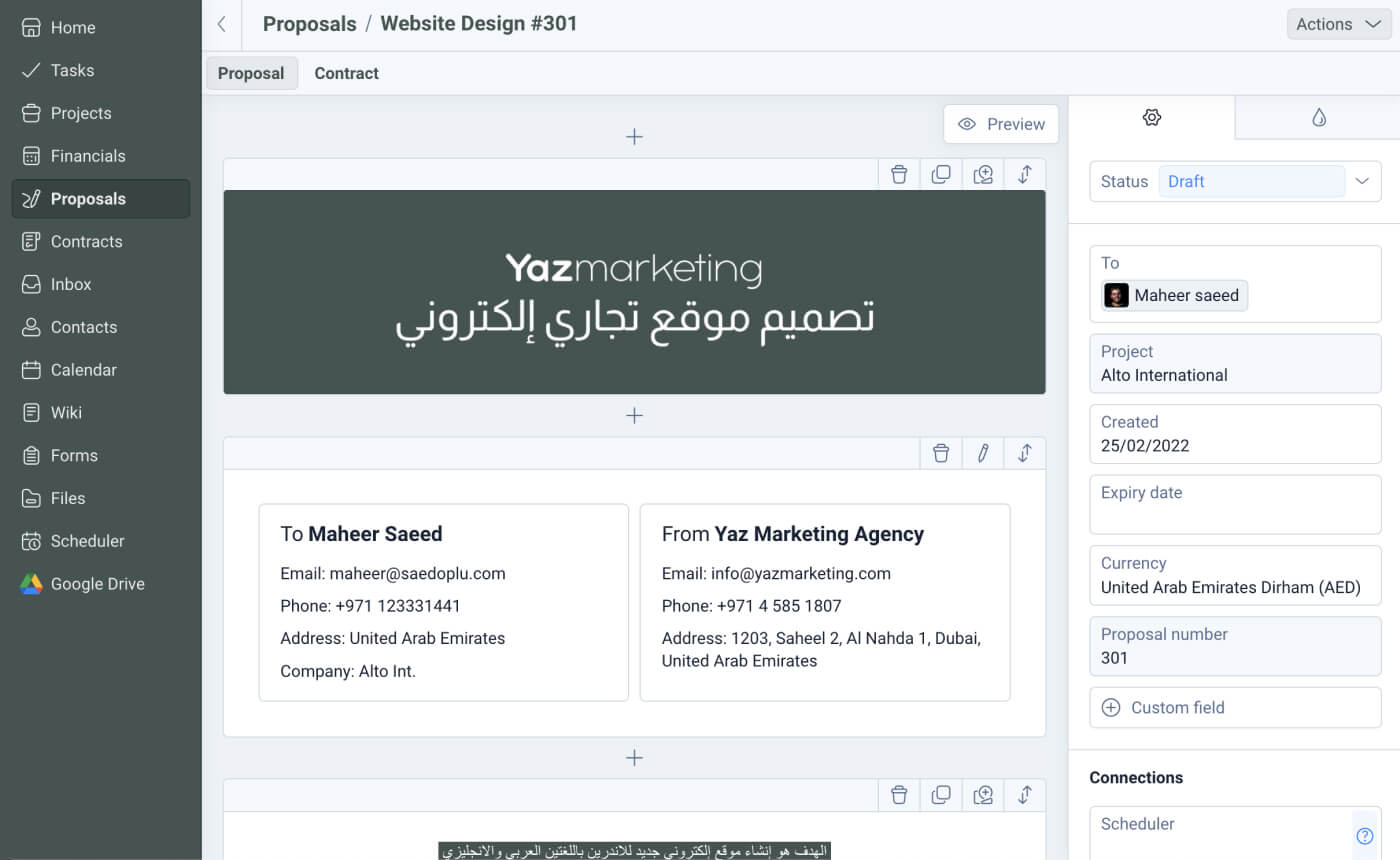 Yazan and Mawaheb started their agency while in university and initially had only a few clients. As their business grew though, they realized their processes were too inefficient to scale. They needed a system that would save them time and earn them money.

Arguably the hardest and most important part of running a successful marketing agency is regularly converting prospects into paying customers. Without the ability to get customers on an ongoing basis, an agency is grounded in uncertainty and may find it hard to grow.

Moreover, even if you are great at writing proposals with a high conversion rate, at the end of the day onboarding new customers is still a numbers game. It’s inevitable that a substantial percentage of proposals sent will either be rejected, canceled, or flat-out ignored.

That means it’s crucial for agencies to have a defined system for writing high-quality and enticing proposals that have high conversion rates. However, this system of writing stunning proposals also needs to be quick and nimble so that proposal writing doesn't become an overbearing cost center for the business.

This was the problem Yazan and Mawaheb sought out to solve after founding their Marketing Agency, Yaz Marketing, in 2017.

When they started, Yaz Marketing was far from a proposal powerhouse. Yazan and Mawaheb began with no clear organizational structure for courting new prospects with proposals.

They often found themselves relying on writing proposals with basic document creation tools such as Microsoft Word. While this process worked fine in the early days, there were several issues with it.

Once the pair graduated from college they knew that if they wanted to see the company thrive, they’d have to invest in developing business processes that solved these problems. What they ended up with is a brilliant way of writing high-quality proposals tailored to each prospect in just a matter of minutes.

Discovering a System to Streamline Operations

Compared to their old method of proposal writing, which took ‘hours’ to create a new proposal, their new process allows them to create a proposal in just a few minutes. This amounts to an overall reduction in time spent writing proposals of about 95%, or roughly 200 hours saved for the company, which sent 200 proposals in 2021.

Yazan: There are so many other platforms out there and we looked into some to be honest, but we actually felt that Plutio is going to go somewhere we want to be in. We don’t want to switch all the information in somewhere else and then go back to Plutio. Overall, Plutio is amazing.

How Yaz Marketing Makes Customized Proposals in Less than 5 Minutes

The key to their success has been in Plutio’s ability to dynamically insert client details into exiting proposal templates. Once they have a prospect loaded into Plutio, creating a proposal for them automatically includes key client details, such as the company name and contact information.

Next, Yaz and Mawaheb dynamically insert custom proposal fields that correspond to key parts of the document. Filling out these fields further customizes each proposal to each prospect, helping to make prospects feel that their particular needs have been fully considered before the proposal was made.

Mawaheb: It gives the client the feeling that this is customized for them and for their industry and without us having to put a lot of effort in writing each and every word.

On Yaz Marketing’s social media marketing proposals, Yaz and Mawaheb simply have to fill out custom fields indicating the social platforms they will be using, the industry of the prospect’s business, and the number of posts they’ll be making per week, and voila! The proposal is fully customized to that particular client’s needs.

Other Key Benefits of Using Plutio

While the proposals feature has been one of Yaz and Mawaheb’s favorites, they’ve also leveled up many other aspects of their Agency using Plutio, including project management, contracts, automatic invoicing, and forms.

One of Yaz and Mawaheb’s favorite features of Plutio is the fact that proposals can be directly linked to contracts. This means that when a client is ready to sign a proposal, the contract is included and they’ve covered their legal bases as well.

Once a client signs proposal, they’ll automatically be enrolled in a subscription for the services Yaz Marketing will be providing. This saves additional time on billing and payment collection and ensures that Yaz and Mawaheb can focus their energy on the tasks they are getting paid to do.

Yaz and Mawaheb use the project management feature of Plutio to build a ‘to-do list’ for each new project they’re working on. Using this list, they can check off important tasks as they are completed.

In addition to tracking projects and tasks, Yaz and Mawaheb also track each prospect’s status in Plutio. By doing so, they can see at a glance which opportunities are moving forward and which have hit a snag.

Having projects in the same place clients signed their proposals and pay their invoices also means clients find it easy to check in on the status of projects.

Mawaheb: This is something that our clients love, is the transparency of the work. So nothing is hidden, you get to see everything.

Yaz Marketing has been able to use forms for a variety of purposes, from taking advertising requests to collecting feedback on the services that they’ve provided.

Having a way to keep files for every client in the same place that work is being done has been central to Yaz Marketing staying organized. It also gives them the ability to stay on the same page with the latest files for a given project, client, or task.

Being an organization that sends out multiple proposals per week means that it's extremely important that this system is streamlined as much as possible, and Yaz Marketing luckily has found in Plutio a way to do that. Using Plutio to dynamically generate proposals has reduced the amount of time spent on proposals by 95% because they no longer have to manually write and send them. Instead, everything is handled by Plutio. Moreover, they've also found a proposals system that keeps all of their proposals safe, in one place. Proposals can be made from any computer from anywhere in the world, and there's never a risk of forgetting where the proposal was saved to

In addition to viewing and signing proposals, clients can view and sign contracts and pay invoices all from within the app. This means that Yaz Marketing has been the ability to streamline its legal and payment collection processes. Once a client signs a proposal, they are immediately taken to the corresponding contract and then to the invoice. Plutio also lets the client choose the payment method that works best for them. Is it any wonder that they've already been paid almost $400,000 USD using Plutio?

Having project management as a key part of the rest of the system ensures that Yaz Marketing can easily collaborate with their clients, without having to introduce them to an entirely new system. This reduces the amount of back-and-forth and ensures that time spent on a project is not wasted on unnecessary updates and communication. Instead, project progress and status are communicated in real-time through the platform itself.

The complete toolkit to run your business

The intuitive all-in-one solution to manage and collaborate on projects, share files, build forms, create proposals, get paid, and automate your workflow.

Get Started - It's Free